The Juno space probe prepares to arrive at Jupiter after a space voyage of five years and having covered a distance of 1.8m miles

On the 5th of July Nasa’s spacecraft will attempt to fall into Jupiter's orbit, in a continuing attempt to understand how the planet formed, to learn more about its mysterious weather system, and what drives its aurorae.

Juno’s first close up images of Jupiter are not expected until late August when the spacecraft swoops towards the surface with its cameras switched on.

For the next 20 months the probe will steadily build up an unprecedented map of the planet before its instruments finally fail and the spacecraft plunges into Jupiter’s swirling clouds, never to emerge again.

by Andrew
While NASA's Juno mission has entered into an orbit around Jupiter, NASA has released a time-lapse video of Jupiter and its moons during Juno's approach. The video is set to Vangelis' "Titans" from the Alexander score (2004).

by Andrew
NASA's Juno spacecraft will make its fifth flyby over Jupiter's mysterious cloud tops on Monday, March 27, at 1:52 a.m. PDT (4:52 a.m. EDT, 8:52 UTC). At the time of closest approach (called perijove), Juno will be about 2,700 miles (4,400 kilometers) above the planet's cloud tops, traveling at a speed of about 129,000 miles per hour (57.8 kilometers per second) relative to the gas-giant planet. All of Juno's eight science instruments will be on and collecting data during the flyby. 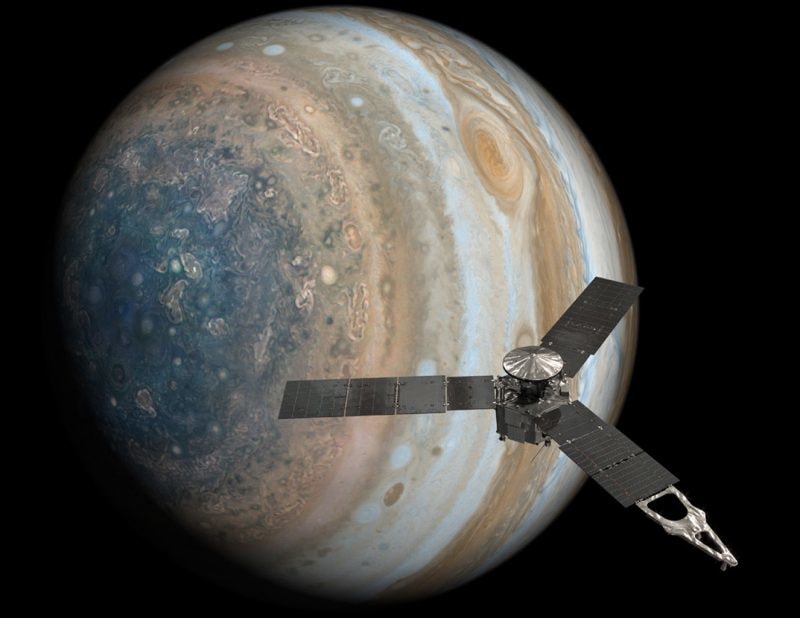 "This will be our fourth science pass—the fifth close flyby of Jupiter of the mission—and we are excited to see what new discoveries Juno will reveal," said Scott Bolton, principal investigator of Juno from the Southwest Research Institute in San Antonio. "Every time we get near Jupiter's cloud tops, we learn new insights that help us understand this amazing giant planet."

The Juno science team continues to analyze returns from previous flybys. Scientists have discovered that Jupiter's magnetic fields are more complicated than originally thought, and that the belts and zones that give the planet's cloud tops their distinctive look extend deep into the its interior. Observations of the energetic particles that create the incandescent auroras suggest a complicated current system involving charged material lofted from volcanoes on Jupiter's moon Io.

Peer-reviewed papers with more in-depth science results from Juno's first flybys are expected to be published within the next few months.

Juno launched on Aug. 5, 2011, from Cape Canaveral, Florida, and arrived in orbit around Jupiter on July 4, 2016. During its mission of exploration, Juno soars low over the planet's cloud tops—as close as about 2,600 miles (4,100 kilometers). During these flybys, Juno is probing beneath the obscuring cloud cover of Jupiter and studying its auroras to learn more about the planet's origins, structure, atmosphere and magnetosphere.

Source: The Daily Galaxy via NASA

by Andrew
Juno Flies Past the Moon Ganymede and Jupiter, With Music by Vangelis

On June 7, 2021, NASA’s Juno spacecraft flew closer to Jupiter’s ice-encrusted moon Ganymede than any spacecraft in more than two decades. Less than a day later, Juno made its 34th flyby of Jupiter. This animation provides a “starship captain” point of view of each flyby. For both worlds, JunoCam images were orthographically projected onto a digital sphere and used to create the flyby animation. Synthetic frames were added to provide views of approach and departure for both Ganymede and Jupiter.

All times are UTC+03:00
Page 1 of 1
Powered by phpBB® Forum Software © phpBB Limited